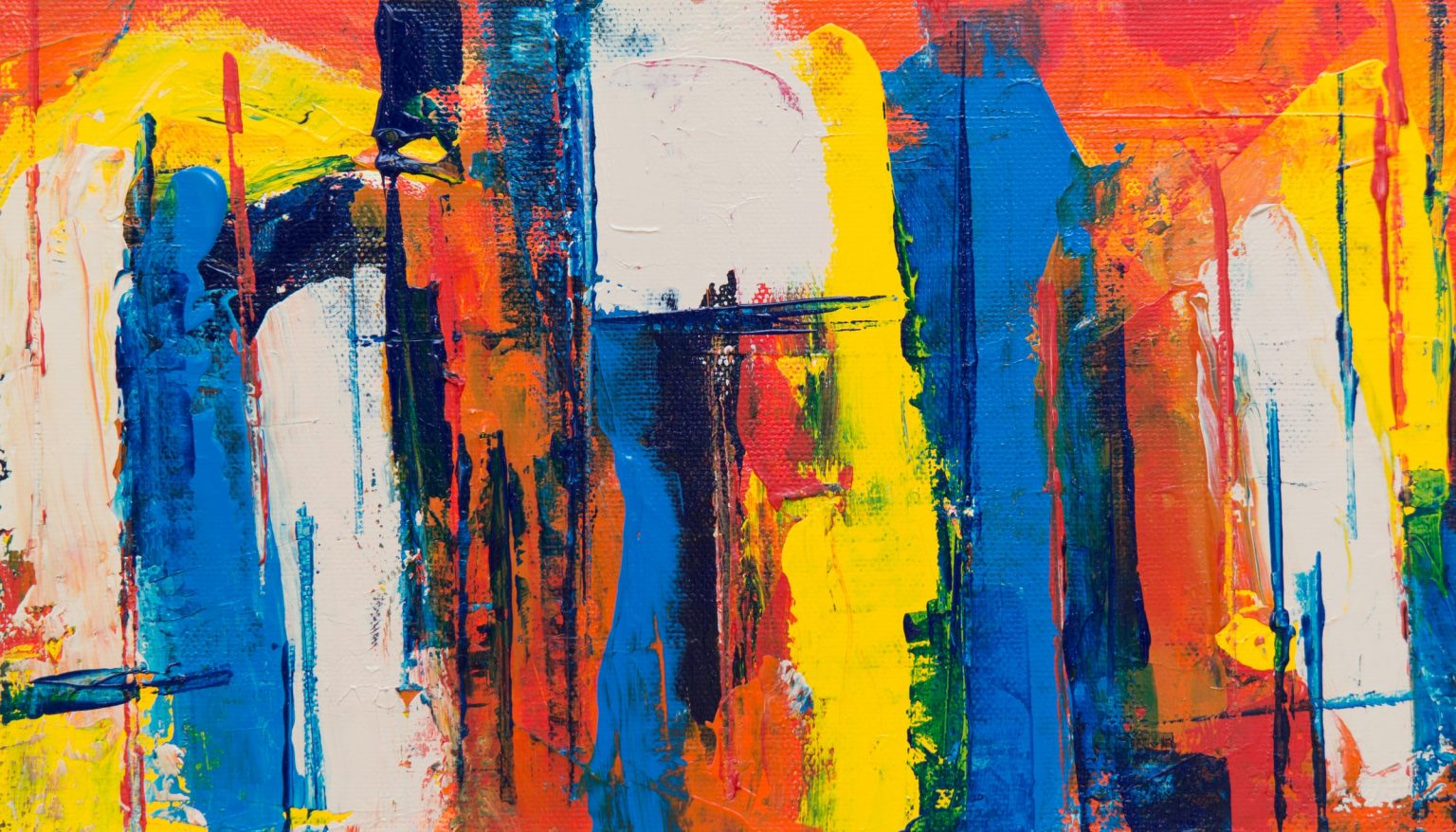 Artificial intelligence (AI) is becoming incorporated into more and more aspects of our daily lives, and many processes involving simple repetitive tasks have already become fully automated. Artistic areas, however, have long been considered the exclusive domain of human creativity. But it turns out that machines can do a lot more in the creative industries than we thought before, and even in the artistic domain, humans are now being challenged by their own creations. But how far can it go and what is the future of art and AI?

How Does It Work?

We tend to think of art as something inherently human as it requires imagination, natural creativity, and inspiration. So how come that we are talking about AI with regard to this completely non-artificial area?

First of all, there are two ways of employing AI in creative industries. The first one is about helping with the automation of repetitive tasks (e.g. writing keywords for paintings) to let artists dedicate more time to the creation process. The second approach implies using AI to create the product instead of helping with related tasks. In doing so, people write computer programs to generate art and provide these programs with a certain degree of autonomy. Some AI algorithms follow the exact pattern of the creating process and produce the artist’s desired visual outcome while others may analyze thousands of pieces of art and generate new ones in adherence to what they have learned. The general concept is quite simple – to teach the AI systems to understand and replicate the artworks created by humans. No matter the creative industry – paintings, photography, music, video, etc. – the approach is the same: feed the algorithm with a large enough data set, and AI will produce the artwork with different styles blended together.

In the last few years, we witnessed the emergence of hundreds of AI artists, complex algorithms that create unique works of art including profound poetry, stunning visuals, transcendent music, and even realistic movie scripts. In October 2018, an AI-generated painting “Portrait of Edmond Belamy” was sold for no less than $432,500 (nearly 45 times its high estimate). 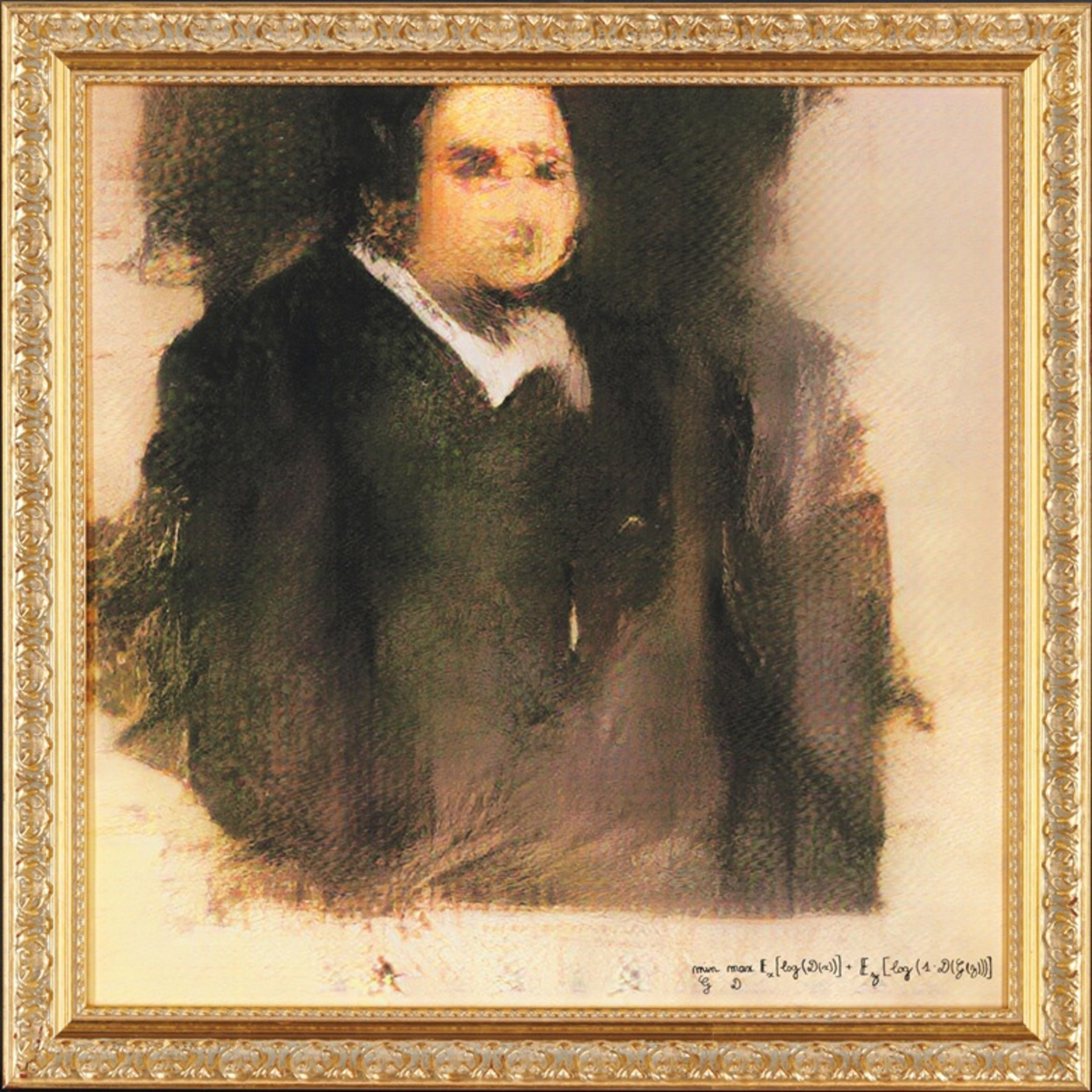 This piece was generated with the use of a generative adversarial network (GAN) created by a Paris-based art collective called Obvious. To make the algorithm, the system was provided with 15,000 portraits created between the 14th and 20th centuries for analysis and “learning the aesthetics” of past examples of portraiture. The resulting “Portrait of Edmond Belamy” proved that machines are able to bring a new genre of art.

In the example below from Google AI, there are four original pieces of artwork – one in each corner. The images between the corners represent the degrees of blending one image into another and applying the resulting style to a new photo. The center image, therefore, is the result of an equal mix of all four types. 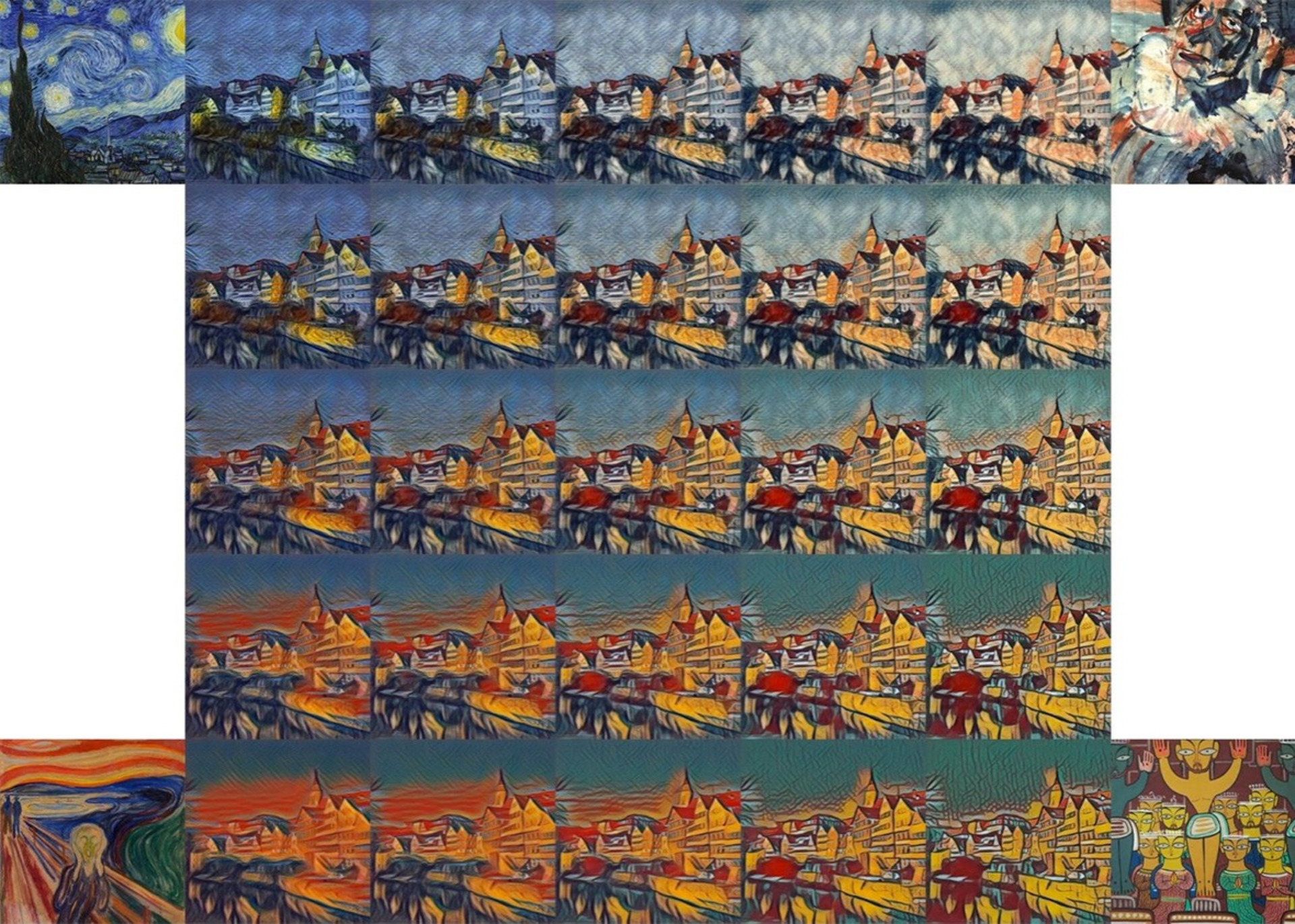 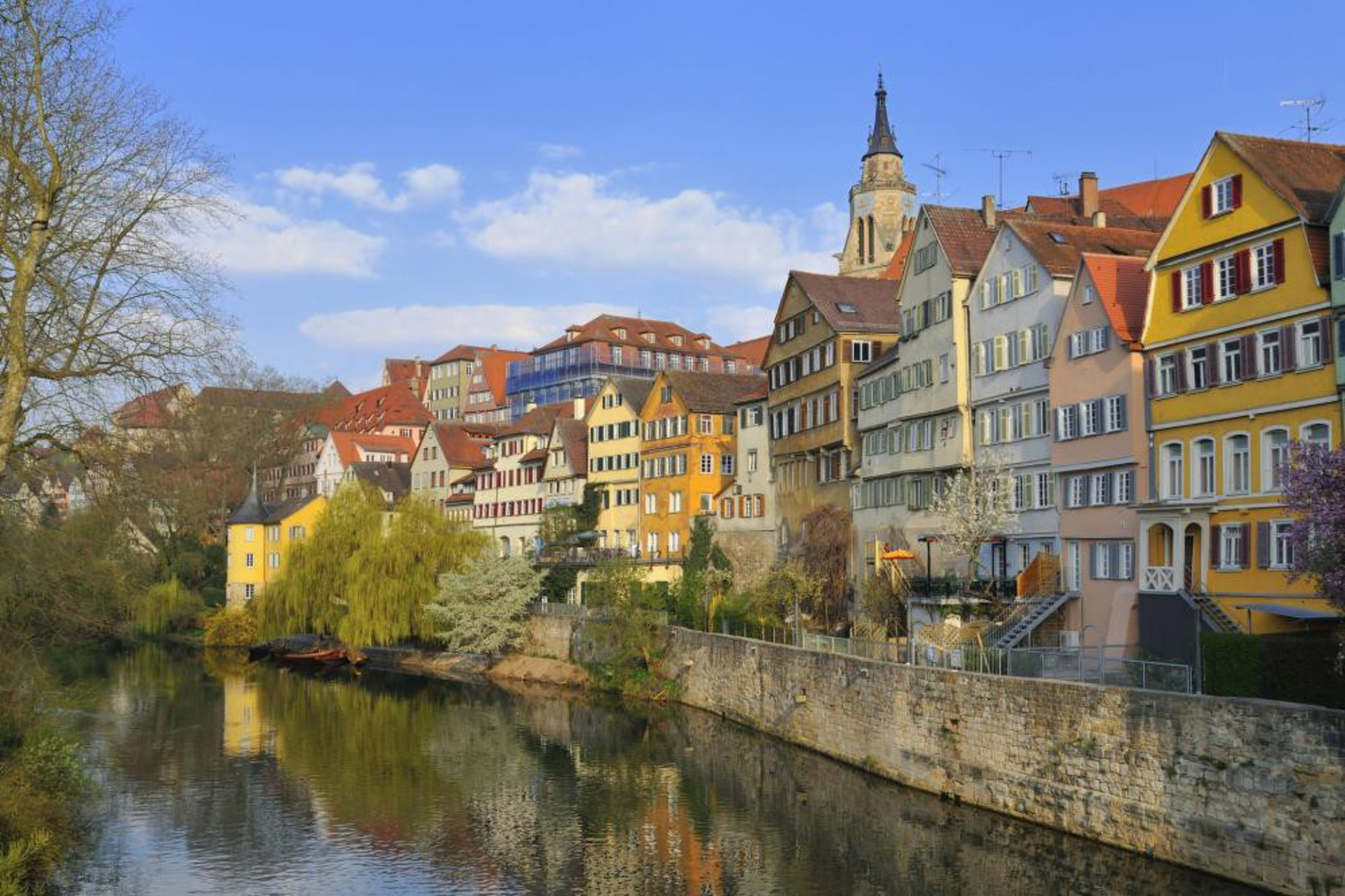 Original photograph of Tübingen Google applied the blended styles to

Employing creative AI is surely not limited to pictures. As for the film industry, in 2016, a “creative AI” that decided to name itself Benjamin wrote a film, Sun Spring, and in 2018, directed another one, Zone Out.

Music is not an exception as well. There are dozens of AI music composition tools for the creation of original pieces. Actually, using AI as a tool to make music or aid music composer has been in practice for several decades. Back in the 90s, David Bowie helped develop an app called Verbasizer which took the literary source material and randomly recorded words to generate new combinations for lyrics. In 2016, researchers at Sony employed the Flow Machines software to create a melody in the style of The Beatles. About a month ago, Sony Computer Science Laboratories launched that very software as an AI-assisted music production plugin that suggests chords, melodies, and basslines in your chosen style. And in 2019, Amazon presented “the world’s first machine learning-enabled musical keyboard.” If you want to find out more, take a look at the video.

The works of AI artists are indeed raising questions about the nature of art and the role of human creativity in future societies. One of the main questions regarding AI in creative industries is “Can AI be genuinely creative and produce real art?”

Let’s discover the reasons for people being reluctant to answer positively. First of all, AI lacks intentionality and consciousness – a direct consequence of Searle’s Chinese Room argument (1980) which states that regardless of how intelligently or human-like computers may perform, they cannot be thought of as having a mind, understanding, or consciousness.

Secondly, people are quite unenthusiastic to accept artificially intelligent agents as a part of our society. And it is not only rejection of something unnatural – we reject biological ones as well! Consider the case with “Nonja,” a twenty-year-old painter from Vienna, whose abstract paintings had been exhibited and quite appreciated in art galleries. But as soon as it was known that the artist was, in fact, an orangutan from the Vienna Zoo the works certainly raised more curiosity and interest but became much less appreciated.

But the thing is that computers are not the first example of unconscious creators – the first one is evolution. As Stephen Jay Gould (1996) brilliantly points out: “If creation demands a visionary creator, then how does blind evolution manage to build such splendid new things as ourselves?”

A Threat or an Opportunity?

It depends. Depends on your vision, on people’s perception, and future AI developments. When AI becomes more sophisticated and superior, it could probably make some people lose their jobs, but at the same time, it can both help artists coping with routine unpleasant tasks and bring them the spark of inspiration. One of the benefits is that AI art composers help people with little knowledge of music or poetry or art create something original. As most of these technologies are still at the stage of development we still don’t know what their full potential may be. The future will tell us!

AI is surely gaining momentum in our lives, and creative industries are no exception. AI algorithms are now able to generate beautiful paintings, melodies, lyrics as well as photography and movie scripts. Some people are afraid of the algorithms challenging human artists while others are excited about how AI may be helpful and inspiring. The main thing is not to be scared of technology – it is to find ways of employing it to your benefit.